In the mid 1960s Mo studied physics and mathematics at the University of Sussex.
During this period he played both drums and bass in a wide variety of different bands. Once he graduated, a short spell as a laboratory research assistant convinced him that a career in music was preferable and, along with other ex-university pals, he formed a progressive jazz/rock group called Affinity, which was managed by the late Ronnie Scott. From that time on his career blossomed into one of the most prestigious of any contemporary bass-guitar player. Mo is now established as a highly respected session musician, record producer, composer, solo artist, author, and now raconteur.

As a sideman Mo has toured the world — or played concerts with:

As a studio session musician, working at studios variously in UK, USA, Canada, Caribbean, Sweden, France, Italy, Ireland, and Japan, Mo has played on over 400 albums — and many singles — by artists as varied as:

Mo has composed and produced
hundreds of titles for the major Production Music Libraries, co-wrote with Ray Russell the instrumental ‘So Far Away’, for Gary Moore, co-wrote with Mike Walling the comedy hit single ‘Chalk Dust,’ for The Brat (aka Roger Kitter), co-wrote with Kim Goody the song ‘Sentimental Again’, which reached the final in the Song for Europe Contest in 1990 (and which was also covered by Sandie Shaw), co-wrote with Ringo Starr, Joe Walsh, and Kim Goody the main song ‘In My Car’, from Ringo's album Old Wave, and has co-written titles on Linda Hoyle’s new album The Fetch.

His many film sessions include:

For Your Eyes Only, Octopussy, Revenge Of The Pink Panther, Clockwise, Heaven's Prisoner, Lost And Found, Billy The Kid And The Green Baize Vampire, and Silver Dream Racer.

Those for TV include:

Mo worked as both archivist and interviewer
for the UK Channel 4 TV music series — Live From Abbey Road — where he secured an interview with George Harrison. The programme was the brainchild of co-producer Peter Van Hooke.

Following a successful launch of British Rock Guitar at Dingwalls in Camden Mo now gives amusing and informative illustrated talks at Arts Centres and colleges around the country. 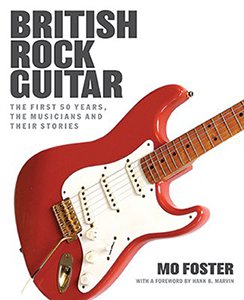 Back in 1975 Mo pioneered the teaching of Bass Guitar
in Britain by founding the first-ever year-long course at Goldsmiths College, University of London, and later wrote a pioneering ten-part series on Fretless Bass for Bassist magazine. He continues to give occasional master-classes at music colleges in London, Brighton, Leeds, Liverpool, Guildford, and Manchester.

Played bass for Cliff Richard, Brian May, and Brian Bennett on a 12-hr session at Abbey Road Studios for a re-make of Cliff’s 1958 hit ‘Move It’.

Alan Boyd recreated a studio session at Air Edel Studios for ONE MORE TIME, a feature documentary that tells the story of the UK session players of the 60's & 70's who helped forge the sound of the British Invasion and recorded the music of a generation.
Featured players: Mo Foster, Ray Russell, Brian Bennett, Mike Moran, Clem Cattini, Bob Henrit, Greg Walsh.

The bonus track 'Who's There' will be available on iTunes as a single:
https://itunes.apple.com/gb/album/whos-there-single

I had been a fan of Gil’s music since I first heard Sketches Of Spain in the mid 60s, and in 1983 I was extremely thrilled to get a call — whilst on the road in the USA with Phil Collins — inviting me to tour with the Gil Evans British Orchestra. The band consisted mainly of luminaries from the UK jazz scene, including John Marshall, Stan Sulzman, Ray Russell, John Taylor, John Surman, and Henry Lowther.

Sometime later — inspired by this amazing experience — I put together a smaller band for a gig at the Pizza Jazz Club in Dean Street, Soho. The sound I was aiming for was a sort of Gil Evans in Miniature: structured, with beautiful harmonies and melodies, and with room for great solos.

I was privileged to have been sent copies of original scores by major jazz composers such as Gil Evans (whose son Miles is excited by this project), Mike Gibbs, and Django Bates.

The music we played that night featured works such as 'Django' (by John Lewis), ‘Freedom Jazz Dance’ (by Eddie Harris), ‘Three Views Of A Secret’ (by Jaco Pastorius), and ‘Gone’ (by Gil Evans).

I chose the players — all friends — simply because they were the best: Ray Russell, Chris Biscoe, Nic France, Corrina Silvester, and Malcolm Edmonstone, some of the finest jazz soloists in the country. It was quite simply the best band I have ever played in. (Malcolm has since had to leave and has been replaced by Jim Watson).

This project is important to me because I want to share and pass on the legacy and love of Gil's and other great composers' music to audiences and younger musicians so that it doesn't get lost once we retire.

Following rehearsals at Craxton Studios in North London our World Premiere was at the London Bass Guitar Show at Olympia, Kensington, on 4th March 2018. It was a thrill to play this new material for the first time. A tour is planned.

For photos of the band (MF&F photos)

Mo is a recipient of a BASCA Gold Badge Award.
The ceremony took place on Tuesday 14 October 2014 in the Lancaster Ballroom at The Savoy, London.

Sponsored by PPL and PRS for Music, the BASCA Gold Badge Awards honour those who have worked tirelessly to support the British songwriting and composing community. They are an opportunity for BASCA members to come together and celebrate the achievements of an exceptional group of people who have made an outstanding contribution to their professional lives.